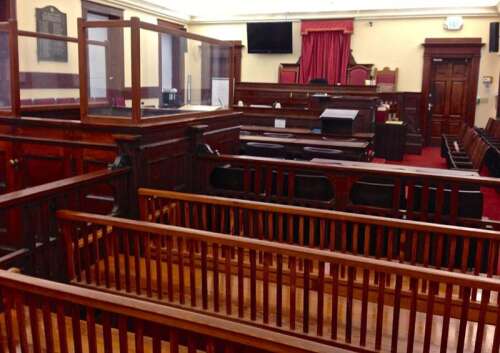 Heat of moment in shooting led to misidentification, lawyer says – The Royal Gazette

The high-stress environment of a shooting incident could have led to the misidentification of an attempted murder defendant, a lawyer told a Supreme Court jury yesterday.

Marc Daniels, defense attorney for Kyari Flood, claimed that much of the circumstantial evidence presented by prosecutors was inaccurate.

He suggested that the victim’s girlfriend, who witnessed the shooting and identified the masked shooter as Mr. Flood with her eyes, may have been more focused on the weapon.

Mr Daniels said the mask obscured the shooter’s face and that the woman assumed it was Mr Flood after she was shown a photo of him at an ID parade higher resolution than others.

Mr Daniels told the court: “Even a mother can confuse her own offspring – her own flesh and blood.

He added: “When we think about our memories, we often don’t see a movie playing in our mind – we see fragments of images.

“These fragments are constructed by the brain, which perceives certain things differently.”

Mr Daniels spoke as the prosecution and defense summarized their case to the jury.

Mr Flood, 22, denied charges of attempted murder, wounding with intent to cause grievous bodily harm and using a firearm to commit an indictable offence.

The incident reportedly happened on March 24, 2020 on Parson’s Road.

Maria Sofianos, for the Crown, told the jury that Mr Flood and the shooter both wore white helmets the night of the shooting, as seen in CCTV footage, and that they were the same person.

She added that the house Mr Flood was staying in was close to the scene of the shooting and that he had had “enough time” to return to his home, change his clothes and dispose of the gun before returning to the scene to see if his victim was dead. .

She added that he ran after seeing police lights in the distance, but was chased and arrested.

But Mr Daniels said a gunman would have had no reason to return to the scene of the shooting and that his client was in the area because he needed to get his painkillers, which he had left with a friend.

He added that Mr Flood had parked next to the church as there were no safe places to park on Deepdale Road West, where his friend resided.

Mr Daniels said his client had no bullet residue on his clothes or body and did not smell like he had just taken a shower.

He added: ‘The Crown cannot simply circumvent the lack of forensic evidence.

“The Crown cannot point to any specific evidence that would give you the impression that Mr. Flood was involved in any way in this situation.”

The court heard earlier that the 37-year-old victim, who cannot be named for legal reasons, was shot dead outside his home after two men arrived at his house on a single motorbike.

He ran into the house and the shooter followed, but the assailant left when the victim hid in the bathroom.

The victim’s girlfriend, who spoke earlier, who also cannot be named for legal reasons, said she recognized the shooter and identified him as Mr Flood.

Ms Sofianos said it was Mr Flood who entered the house as he knew the couple and the layout of the house.

She added that the victim’s girlfriend had the incident “forever etched in her mind” after she was woken by a gunshot and saw her partner bleeding from an arm wound.

Ms Sofianos admitted that bullet residue was not found on Mr Flood or his clothing and that the weapon used in the incident was never found.

But she insisted there was enough circumstantial evidence which, when put together, “points to Kyari Flood as the shooter”.

Ms Sofianos said: ‘We say that each piece of circumstantial evidence is a strand which, taken as a whole, brings you to the conclusion that the accused is guilty of the offenses charged.’

• He is The Royal Gazette policy of not allowing comments on stories regarding criminal cases. This is to prevent the publication of statements that could jeopardize the outcome of this case.

Human Identification Market is expected to grow at a CAGR of 8.8% over the forecast period 2022-2029