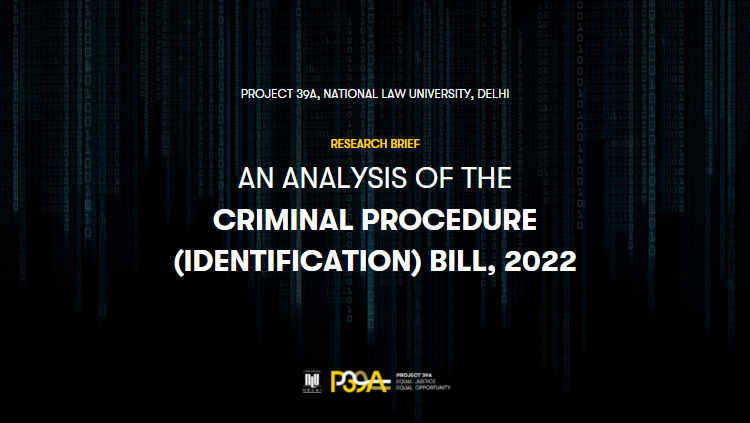 On 28 March 2022, the Criminal Procedure (Identification) Bill 2022 (“Bill”) was tabled in the Lok Sabha. The bill aims to create a framework for the collection of certain “measurements” by police or prison officers. The term “measurements” has been defined to include a wide range of sensitive personal information such as fingerprints, palm and foot prints, iris and retina scans, biological samples and behavioral attributes. The bill allows measurements and their records to be collected, stored indefinitely, processed and disseminated for the stated purpose of identification and criminal investigation and crime prevention.

The Project 39A forensic team, led by Shreya Rastogi, has released a comprehensive report titled “An analysis of the Criminal Procedure (Identification) Bill, 2022‘ (“Report”) which assesses the constitutional, regulatory and scientific issues arising from the Bill as well as the administrative aspects of the implementation of the Bill. The report also discusses the interaction with the current framework of laws occupying the area as well as the DNA Technology Regulation (Use and Application) Bill, 2019 (“the DNA”).

The DNA Bill, introduced in 2019 and currently being debated in Parliament, also raises several constitutional and procedural concerns. However, even with significant problems with the DNA bill, it still offers multiple safeguards that are completely absent from the current bill.

Of even greater concern is the need to conduct capacity building exercises and training for those who will be collecting the measurements – currently there are no standardized collection standards prescribed, leading to significant data management concerns. quality. The bill does not prescribe any restrictions on the use of the data collected and the term “analysis” is not defined. The report argues that the lack of clarity in the collection and use of ‘measurements’ increases opportunities for misuse, particularly of biological samples and their analysis.

In light of the scientific and regulatory review of the bill, the report argues that the bill violates the fundamental right to equality, the right against self-incrimination and the right to privacy enshrined in sections 14, 20(3) and 21 of the Constitution.

The bill raises significant concerns about the over-delegation of legislative authority to regulatory bodies as well as over-delegation of power to officials under the bill, in violation of Section 14 of the Constitution. These officials include police officers at the rank of chief constables, magistrates, as well as prison officers. In addition, the bill creates an unreasonable classification between categories of arrestees who can be compelled to provide biological samples and those who cannot. Several other provisions reveal no adequate determining principle and pose serious problems of manifest arbitrariness.

The bill also fails to meet the fourfold requirement of the proportionality doctrine set out in Judge KS Puttaswamy v. union of india (I). The absence of a demonstrated rational connection between the legitimate objectives of the bill and its coverage of persons who may be compelled to provide their measures makes the bill an inappropriate means of achieving those objectives. However, the provisions of the bill also constitute an unnecessary and disproportionate invasion of the right to privacy.

The bill has broad implications for the right to privacy, equality and the integrity of investigative processes.

To learn more, access the report and its executive summary here: https://www.project39a.com/identification-bill