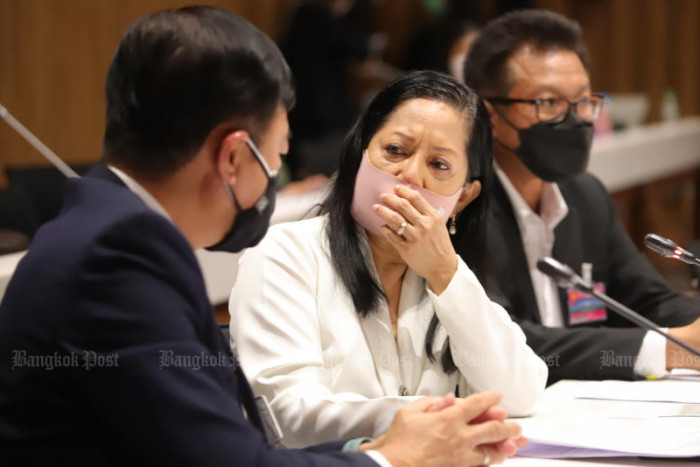 The mother of drowned actress Nida “Tangmo” Patcharaveerapong on Monday called for the withdrawal of a request she had previously made to the Senate Committee on Human Rights, Liberties, and Consumer Protection for an investigation into police handling of her daughter’s death.

Panida Sirayootyotin asked the chairman of the committee, Senator Somchai Sawaengkarn, to allow him to withdraw the letter filed by his former lawyer Krissana Sriboonpim.

She had authorized Mr. Krissana to write the letter, which was signed by her, asking the committee to look into the matter. But after appointing a new lawyer, Decha Kittiwitthayanan, she found that the letter did not correctly convey her intent.

Mr. Decha advised her to withdraw the letter, she said.

She was accompanied by Mr. Decha when she met Mr. Somchai.

Mr Somchai accepted the letter and said Ms Panida’s latest request would be considered by the committee at a meeting next week.

He also insisted that the committee did not intervene in the police case, but worked outright to ensure justice for all involved.

Former chief medical examiner Pornthip Rojanasunan, a member of the Senate committee, also said on Monday that there was no attempt to interfere in the case by the police.

Mr Somchai said before meeting her that the committee had accepted Ms Panida’s petition to investigate her daughter’s death as it was a criminal case which affected many people.

The committee believed it would be in the public interest. It was a matter of public confidence in the justice process.

The committee had already planned to consider the request at a meeting next week, he said. We would then discuss how the committee would proceed with the matter.

Ms Panida’s request to withdraw her petition will not affect the committee’s work, he said. The committee was not involved for publicity.

The senator said many members of his committee are involved in reforming the justice process.

The police could be assured that the committee would not interfere in the handling of the case. The committee had no power to order the police to do whatever they wanted.

The committee had gone to Nonthaburi police station only to inspect the speedboat in which Tangmo was traveling on the Chao Phraya River when she drowned on February 24, Mr Somchai said.

Khunying Pornthip also said the committee did not intervene in the police investigation. He had only advised the police how to protect evidence from environmental damage.

She believed that the committee would continue its investigation and that the findings would help it determine where the justice process should undergo reform.

Tangmo was with five other people when she fell from the speedboat on the night of February 24. His body was found in the river two days later.

The boat is owned by Tanupat “Por” Lerttaweewit, one of two people charged with negligence leading to his death. The other is the man who admitted he was driving the boat when a “swerve” knocked him overboard.